Leona Cunningham hovered over a medium-size black cauldron suspended from a tripod above a fire in her back yard. She was a slim woman, a little taller than average. Her long dark hair, well streaked with silver, was pulled back in a careless knot. She was dressed all in black: black sweater, black jeans, black boots. It was early evening, the sun so low its beams came through the trunks of a thick stand of trees at the back of her lot. In the low sunlight, the flames of her fire were more felt than seen, casting a warm aura across the beaten earth that surrounded the fire pit. The warmth was welcome; it had been a chilly fall day, with deeply gray skies which had broken open only a few minutes ago.

The weather had started turning cool in late summer. If the signs were right, it was going to be a chilly, wet fall that would turn into a cold, snowy winter.

Leona Cunningham knew how to interpret the signs because she was a witch. She had practiced Wicca, the new-age form of a very old earth-worshipping religion, for decades. One of her gifts in Wicca was understanding the weather. She was rarely wrong in predicting a season. 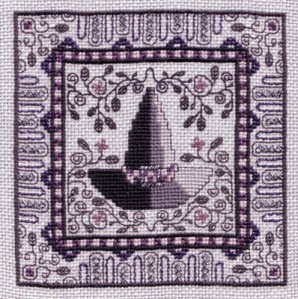 She stirred the mixture in the pot, which was giving off a fragrance like hot cereal. Which wasn’t surprising – it was a mash consisting of ground roasted barley and water, a prelude to beer. Leona pulled some of the burning wood away from the cauldron so it wouldn’t boil. She’d been doing this for so many years she didn’t need a thermometer to know how hot the mash was. Still, “Double, double, don’t cause trouble, fire don’t burn, mash don’t bubble,” muttered Leona, stirring some more. She tried a cackle, but it was a failure. “Darn it, I just can’t get that ratchedy sound no matter how I try,” she lamented, and broke into a genuine chuckle.

Moving skillfully, she lifted the cauldron off the fire and poured its contents through a big strainer into another cauldron, then put the liquid on the fire. Muttering a charm, she tossed in a measure of dried hops to cut the sweetness. She added wood chips to the fire to bring the liquid to a swift, rolling boil, then stepped back to fan her brow with the hot pad. It being autumn in Minnesota, dusk had turned to night with the swiftness of a closing trap door, so now the red and yellow flames were brightly visible.

In the chill of the night, her face cooled quickly. She went up to her back porch and turned on a bright light, then went back to look at the boiling cauldron and stir some more. It wasn’t really smart to do serious brewing over an open fire, she should be using propane. But Leona was a traditionalist – a real traditionalist, reaching back centuries for her methods.

For the next hour, between stirrings and adjusting the fire – boiling was good, boiling over was disaster – she sat on the top step and let her mind ramble.

Leona was the senior partner in Excelsior’s microbrewery–pub, The Barleywine. Thirty years back it had begun as the Waterfront Café. She and her late husband had founded and operated it. After his death three years ago, she kept it open but had slowly added herbed potato salad, soy-bread wraps, and flavored teas to the tuna melts and french fries some customers still demanded. Most of the recipes were of her own creation, and the herbs came from her own garden.

Two years ago the little beauty shop next to the café went out of business and Leona bought the building. She started a second business, Natural Solutions, selling herbal soaps, candles, shampoos, and cooking ingredients. But she was soon overwhelmed by the amount of time it took to make the many little products, time taken from the established business of her restaurant. She couldn’t afford to hire a company to make the herbal products for her, wouldn’t buy artificial ingredients, and buying natural products to sell seemed a duplication of effort. She began to think acquiring the building had been a mistake.

But then a friend complimented her on a potion she had made. Not a tea, not a medicine, but beer. Leona’s husband had made beer – he’d learned how from his grandfather, who had made it during prohibition. Leona had been surprised at how easy it was, and how natural. Like her other herbal preparations, there was nothing artificial in it. Barley, water, yeast, and hops formed the basic recipe. Her friend said Leona’s brews tasted even better than her husband’s had.

So she continued to experiment with the many varieties of hops and yeasts, the occasional sugar or herbal flavoring, and brewing at higher and lower temperatures, until she had four or five that were really, really good. Two won blue ribbons at the Minnesota State Fair.

So when Leona found out a microbrewery in St. Paul was closing and the equipment was to be offered at auction, she went over for a look at it.

It was good-quality stuff, well cared for. She put in what she was sure was a too-low bid – and won.

Then she went to cash in some investments to pay for the remodeling of the herb shop – only to discover that most of it had gone missing. Her theory quickly became that her dishonest investment counselor had taken it to cover some earlier thefts.

Leona had already mortgaged her house to transform Curl Up & Dye into Natural Solutions, and feared she would lose everything – until a friend, Billie Leslie, came forward with a proposal. Billie had experience in restaurant management and wanted to try ownership. For a share in Leona’s place, she would contribute an amount equal to the purloined funds. After a short hesitation, Leona agreed.

While she didn’t like sharing, Leona was pleased to find that Billie worked just as hard as Leona in The Barleywine, and at present it was paying for itself. Still, it would have been nice to be sole proprietor, to make all the decisions – and quickly. Billie took forever to make up her mind about things.

Why couldn’t I have stayed with herbals, like a good, traditional witch? she asked herself from her back porch, as a breeze sprang up and the clouds closed in again. But she knew the answer to that. From an early age she had marched to the beat of a different drummer. Her parents, good Lutherans, had been at first amused, then bemused, then disappointed at their younger daughter. So had Leona’s elder sister, Judy. It had taken Judy years to come around, but her parents never did. Leona’s daughter, Willow, practiced Wicca, but very subtly. Good thing Willow’s husband was agnostic, but it would be interesting to see what beliefs they transmitted to their children when – if – they ever had any.

Meanwhile, she would continue brewing. Beer was organic. And it was old, old, old. The earliest example of writing, a clay cuneiform tablet, proved to be a Sumerian inventory of warehoused beer. The ancient Egyptians, on break from building pyramids, drank beer.

Beer and wine were safer than untreated water, knowledge people treasured down the centuries.

Benjamin Franklin said that beer is proof that God loves us and wants us to be happy – Leona had done a counted cross stitch of that motto and hung it up at The Barleywine, even though she didn’t believe in the God old Ben was talking about.

One good thing about having a partner in business was that Leona occasionally had time to indulge another passion: needlework. She shot a mental blessing at Betsy Devonshire and her shop, Crewel World. Nice to have it local, well run, and well stocked with lots of counted cross stitch patterns.

Too bad poor Betsy thought she had to spend Sunday morning in church, praying the shop continued to do well. All owners of small businesses – Leona included –often walked in unsafe proximity to bankruptcy.

But Leona liked Wicca because it wasn’t a petitionary religion. The Christians and Jews were encouraged to ask their God for favors. In Leona’s mind, this put them in the position of children – and Leona had resented being treated like a child even when she was one. Wicca said people had power within themselves, they just had to learn how to plug into it. It had taken years, and there had been and still were failures. But when it was working, it was like riding Pegasus, soaring upward on the wings of that power. A few falls had taught her to go carefully, wisely, and to build shields against the unexpected.

More than Christians, she was amazed at atheists. Didn’t they see how alive the world was? How full of invisible influences? She checked her watch, rose and went into the house, and came back with two big bags of ice cubes. She sliced the bags open with a pocket knife and poured the ice into her biggest cauldron.

She gave the boiling cauldron a final stir, then unhooked it from the tripod and set it with a loud hiss into the icy cauldron, stirring and stirring to make sure it cooled quickly and evenly. She dipped into it with a quart-size glass pitcher and set that aside on a flat rock.

Then she cleared her mind of residual angry or resentful thoughts about Billie Leslie, her perforce partner. And while she was at it her anger at Ryan McMurphy, who while sober was a fine, upstanding citizen but while drunk a disgusting and angry bigot. It could spoil the brew to make it while unhappy; and to allow angry or unhappy thoughts to take up residence could lead to thoughts of hexes and curses. That way lay madness.

When her mind was sweet and calm, she recited a brief charm to bless the living yeast and added it to the pitcher, stirred thoroughly, then added it to the cooled cauldron, stirring and stirring. The liquid was now called wort. The yeast would eat the sugar released by boiling the grain, turning it into alcohol. She had put in just enough hops to give it the familiar beer bitterness – American beers, in her opinion, were generally over-hopped – and now added a little anise for exotic flavor.

She siphoned the wort – there were about three gallons – into a big glass jug and put an airlock on it that would allow gasses to escape while preventing outside air from slipping in to contaminate the brew.

If she liked the dark ale that her recipe was making, she would make a full size batch in her microbrewery at The Barleywine. She turned the yard light off and just stood awhile, looking up at the dark sky. Ancient peoples had been afraid of the dark; modern peoples drove it away with streetlights and lamps. But Leona had never been afraid of the dark. In her mind’s eye she could see the big glass jug sitting on the earth, the earth turning toward the darkness as the yeast began its stealthy work.

She would call it Don’t Be Afraid of the Dark Ale.